Subscribe to my newsletter and never miss my upcoming articles

TLDR: Django doesn't support NoSQL databases like MongoDB, but this shows how it's possible.

Before installing Django, its good to understand venv, a virtual environment for Python. venv is a self-contained directory that has the Python installation plus external packages. Think of it as any other virtual environment. They should NOT be committed to your repo (you can put it outside the directory or just add it to .gitignore)!

Create a venv with:

This will create the name-of-virtual-env-directory as well as the Python installation and any packages your project needs.

A best practice for handling virtual environments is to store them all in the same place. So, you might want to store them in your home directory or wherever your Git repos are stored. i.e.:

After that, you can activate the virtual environment with:

Anytime you install a package with pip, it will be installed in the active virtual environment you're in.

Gives a list of all the installed packages within the venv.

After installing dependencies into the virtual environment, make sure to deactivate it when you're done. Use command:

pip freeze is similar to pip list, but it also give specific version numbers. Copy the contents of that list into a reqirements.txt file (which is committed into version control AKA Git). Then, when a user clones your project, they run the following, to install all of the project dependencies.

Think of requirements.tx as package.json used in NPM.

| Another option: virtualenv is an even more popular option than venv. Look into using it here.

MongoDB is a NoSQL, non-relational, schema-less, document-based database. Document-based means that the data is stored in key-value pairs, think about JSON. Check out the table below for a comparison between SQL and NoSQL. 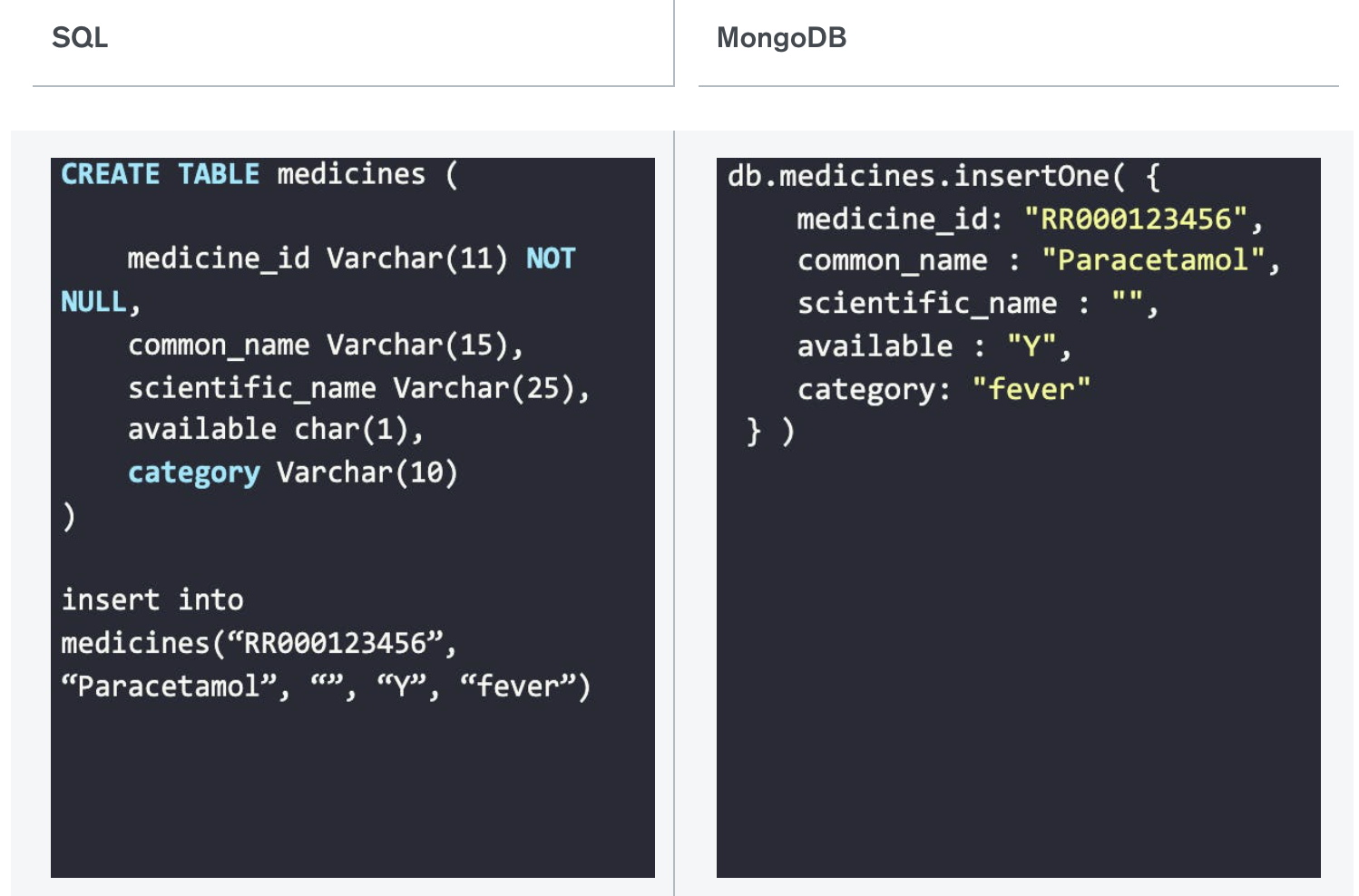 This shows how you need to create a schema with relational databases, and how it's not needed in MongoDB.

MongoDB isn't officially supported by Django, a popular web framework with Python. PostresSQL, MySQL, Oracle, and SQLite are. But it is possible to do this per the MongoDB docs. This is because, usually, you'll want to use a relational database with Django.

Flask is another popular web framework in Python. It's a better choice to use with NoSql databases. You can also use django-nonrel, which is a community fork to add NoSQL support to Django. However, it is not supported and uses an old Django version.

There are 3 options to connect to MongoDB with Django. Pymongo, MongoEngine, and Djongo. But by using PyMongo, a driver, you can connect MongoDB and Django. Instructions for this are in the subsequent section.

After activating the virtual env (from above), installing Django can be done with:

View the Django version with:

cd into a directory and enter the command to create a project:

To start the server & application:

Earlier, we created a project named name-of-project. We can also create apps within the project. Projects can have multiple apps (think of apps as modules). Use this command:

According to MongoDB docs, Pymongo is the preferred way to use MongoDB with Django. But as mentioned above, there are some other options using MongoEngine and Djongo.

For installation with MongoDB, it might be good to install some optional dependencies with:

There's a couple of ways to connect to our database session. One of which involves creating a utils.py file in the PROJECT folder (where manage.py is).

Use env variables to hide the username and password from being exposed. That's out of scope of this tutorial, but if you have questions, just ask.

Then, in the app directory, find views.py. From here, the function get_db_handle() can be accessed.

Now, our MongoDB client is connected! If you'd like to check out how to set this up with MongoEngine or Djongo, just check out this tutorial.

Thanks for reading! Consider following me for more!